Return of the secret life of postcards

This view is of Notting Hill Gate looking west. Postcard images vary enormously in quality. The best ones give you the opportunity to zoom in on the action and catch a flavour of the individual lives of the people in them.

On the northern side of the street a man uses a hooked pole to pull out a shop awning. He keeps an eye on the approaching woman who won’t thank him if any water drips on her from the canvas. There are horse drawn carriages and in the distance a motor bus.

On the southern side of the street:

Henry Hobson Finch’s Hoop Tavern, William J Tame, fruiterer – his staff are loading a delivery wagon- and Matthew Pittman, stationer. This is the corner of Silver Street (then the name for the northern section of Kensington Church Street) about 1904. There’s a rather dejected looking girl standing next to the delivery wagon and in the foreground a woman with a pram.

She’s looking at the display to her right; her arms are straight, pushing the front wheels of the pram off the ground possibly getting ready for moving it off the pavement. The sleeves of her dress are tight to the elbows and then much bigger – the so-called “leg of mutton” look, reaching its apogee in the early 1900s. We can almost see what will happen next as her routine day continues.

The postcard is a picture of the street as a whole. Perhaps we were never intended to look this close. But as I’m sure you know by now I can never resist the details which are often found at the edge of the picture. That’s where the secret lives are found.

This picture shows the Central Line station which was on the other side of the road from the Metropolitan Line. The street on the right is Pembridge Gardens. On the left you can see the buildings on the west side of Pembridge Road – the angle is deceptive and made me puzzle over the maps for a while. Let’s go back to the first postcard. 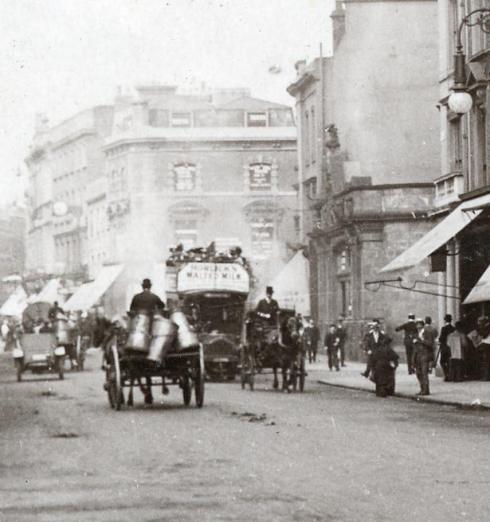 There you can see the station, the same buildings on Pembridge Road, and the motor bus. My transport correspondent tells me that the starter arm is visible underneath the radiator and that the engine block is quite low slung which indicates that this is an early model – later models were higher off the ground to protect the undercarriage and give the driver a better view. Horlicks Malted Milk was not imported into the UK until 1890. Horse-drawn and motor buses co-existed for some years before the horse drawn versions were superseded in the early 1900s.

Look at the horse bus again: 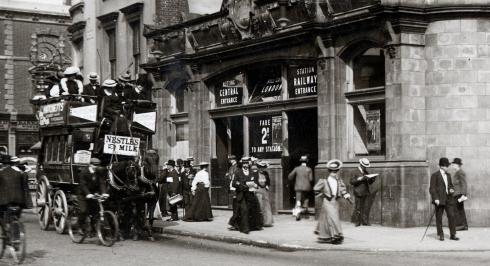 There are people waiting but the bus looks pretty full. That woman striding away from it has the air of a passenger who has just alighted and wants to get moving under her own steam again.

In contrast to the busy high street along the road in Holland Park Avenue things were quieter.

During the day the quieter residential areas would be mostly given over to women and children with a few street workers and delivery boys.

At the portmanteau and umbrella warehouse some window shopping is going on. This picture is not as sharp as some so it’s difficult to be sure if the two women standing together are wearing some kind of uniform. 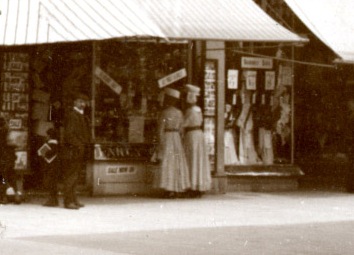 Something about the hats, I think with a piece of material draped down on one side.

Nothing much is happening but some of the locals are paying attention. 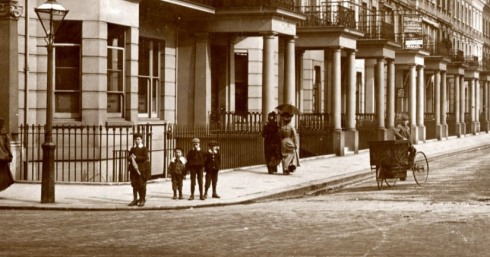 The two women ignore the photographer and go on their way but the children and the man on the delivery tricycle are taking a keen interest.

A little further west the stillness is almost palpable in this view of Gilston Road.

The church in the background is St Mary the Boltons. Instead of terraces of houses there are what one architectural guide has called “crude Italianate villas”. A little sharp if you ask me. I would call them grand suburban villas and the two women who have paused for the photographers are respectable middle class ladies

It’s a quiet dusty summer’s day in the new suburbs.

But it wasn’t all quiet at this end of the old Borough (or Vestry, depending on the date ) of Kensington.

I’ve always found this particular picture of the Old Brompton Road looking towards South Kensington Station quite intriguing, mostly because of what’s happening on the right of the picture.

What does the expression on that boy’s face mean? Or is he just dazzled by the flash? Or is it just one of those odd in between two states expressions which the camera sometimes captures? Something about the body language of the girl tells me that she’s playing some part in this. Has she just said something sharp to the boy? Are they related? Or is she just posing for the camera? There’s just not enough information here. I can’t help thinking that if we just knew a little more there would be a story.

Below Fulham Road, at the junction with Drayton Gardens. Fifty years or so before this scene would be fields, market gardens and cottages in the hinterland between Kensington and Chelsea. 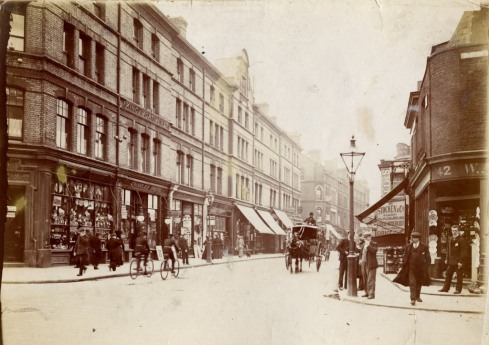 But now this is another busy street.

A belligerent looking shopkeeper, three men just hanging around on a street corner, and that man in the centre, looking to see what’s coming before stepping off the pavement. He looks like a man with places to go and people to see, not a man you want to trifle with. And of course unlike the women in these images if he was to stride out of the picture onto today’s Fulham Road we might not give him a second glance.

We’ve moved quite a short distance from one part of Kensington to the edge. Let’s go back for one more picture. This is a slightly unpromising view of Pembridge Gardens, a little discoloured with age and not particularly sharp. 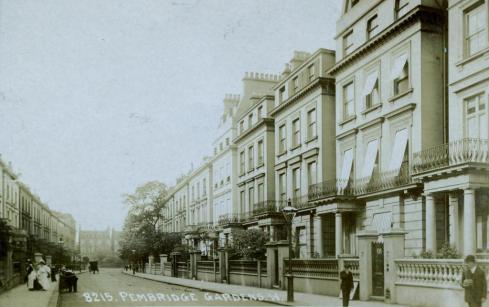 But on the left you can see a woman and her maid.

It’s unusual to see a household servant on the street. Perhaps the delivery man has something which the lady didn’t want to carry in herself. Make your own story out of this one. Sometimes the past is just too out of focus for us to tell exactly what is happening.