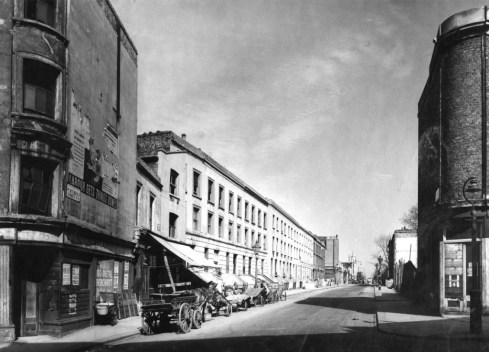 This is Portobello Street (formerly called Bolton Street) in February 1945. You won’t find it on maps today.

Your eye is drawn to the horse and cart, still commonplace in London at that time. But look up from the cart at the almost entirely torn down political poster on the wall where the big caption “Labour gets things done” survives. This was of course months before the election of 1945 which resulted in a landslide victory for the Labour party.

Housing developments in Kensington were not a direct result of the election. There was a huge impetus for new housing after the damage and dereliction left by the war. One typical development was the plan to demolish the whole of Portobello Street to make way for a new housing estate. 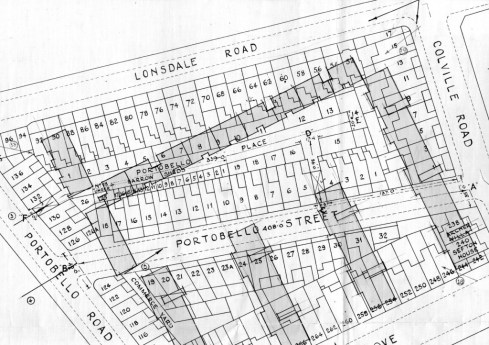 This map, overlaid with the new buildings shows the extent of the new estate. 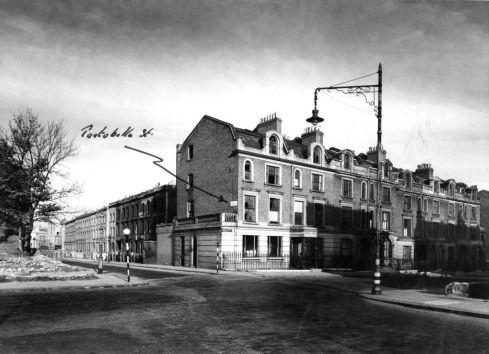 This photograph has been marked up by someone in the planning office. It was another four years before the site was cleared and looked like this, in1949:

Below is the view looking roughly west with Lonsdale Road at the right of the picture : 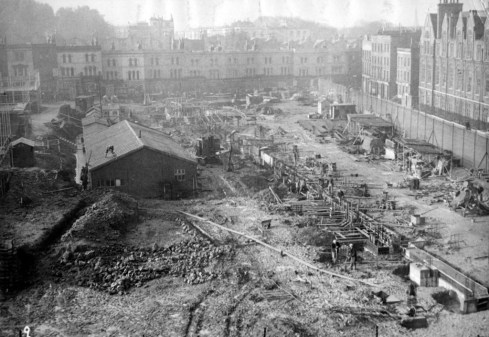 The building work has only just begun and just like with modern  projects the builder’s hut is the first thing to be constructed. This one looks rather more substantial than the prefab units of today.

Looking at the site from another angle you can see the tower of the Convent of Our Lady of Sion, now converted for residential use and known as Thornberry Court, and nearer to the building site the classical front of the Methodist Chapel, now demolished. The buildings on the other side of Westbourne Grove  have also been demolished. This section of Westbourne Grove was originally called Archer Street.

Here is a slightly different view of the same side of the new estate, showing the entrance to the school and what looks like a removals van.

The tower of All Saint’s Church in Talbot Road is in the distance.

This picture shows the east side of the development.

The path running up to the gates is all that remains of the line of Portobello Street. Colville Street goes from left to right

Tricky isn’t it? Let’s try this one:

You can see the estate taking shape. The street in the foreground is Denbigh Street. The bus is parked at the corner of Westbourne Grove. (Not to mention the bowler hatted Man from the Ministry standing there). Colville Street carries on from Denbigh Street and Lonsdale Road can be seen in the background.

To complete the rectangle of streets we need one more view:

Portobello Road itself, running across the back of the picture with the tower of St Peter’s Church, Kensington Park Road just visible, thankfully for the modern viewer.

The previous pictures of the site were taken in May and June of 1950. The last three are all from July of that year.

The housing blocks get taller.

A number 15 bus can be seen on Westbourne Grove.

Here is another view of that corner. The estate is almost finished.

If this selection of camera angles, street name changes , demolished and still existing buildings has left you confused let’s take a final look back at 1945. Below is a view looking down Portobello Road in 1945. 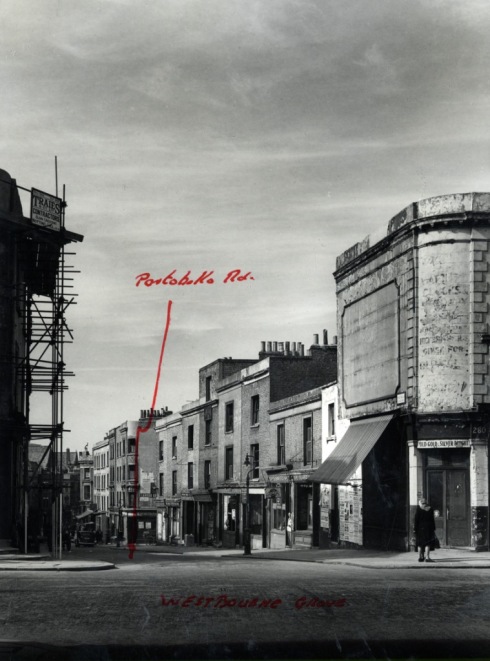 Once again the planner’s pen is at work marking the end of Portobello Street.

A woman stands on the corner looking down the street perhaps unaware that everything behind her is marked for destruction, and new housing.

As you can imagine although this post is economical in terms of words it had a high level of difficulty as far as accurate captions were concerned. Local resident and historian Maggie Tyler helped me with orientation and identification of streets and churches but any errors are my own. Current and former residents of Portobello Court may spot things I’ve missed. Corrections and comments are welcome.

I had intended to include a 1970s picture from our photo survey to show the completed building but when I looked at the set of John Rogers photos of the Kensington part of Westbourne Grove I decided they deserve a post of their own, which will be coming soon.