Sometimes a post arises out of  nothing but curiosity. I started with a few pictures of a shop called Slaters.

Alfred Slater began as a butcher but by 1909, the date of this picture, he was a butcher and provision dealer. The building caught my interest because of its elaborate frontage, not unlike some of the nearby buildings we’ve seen in other posts. The other pictures of the shop show the interior. 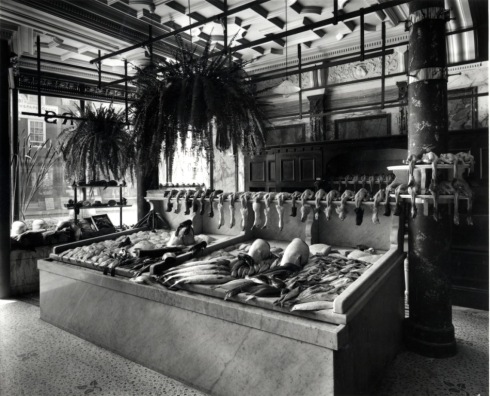 A fine marble slab featuring a selection of dead animals including a set with lolling necks. The interior is as well decorated as the front.

Below, a selection of cured meats, with many cheeses and other products. 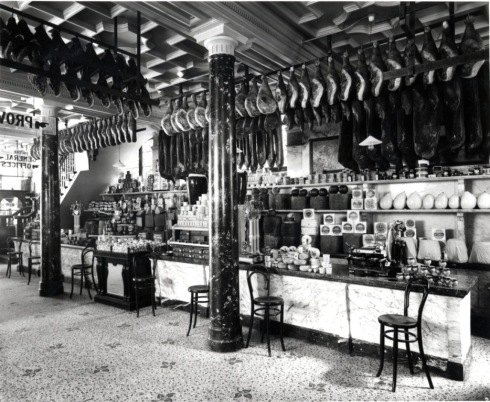 Some chairs for the customers to sit in while giving and waiting for their orders . It seems like a high class establishment to me. No sawdust on the floor here.

But although there is plenty to think about in these three pictures, I wondered if that was all I was going to see of Slaters. The three pictures might make a good short post for Christmas.

After all, 18-20 Kensington High Street is no longer with us. Since 1909 a whole stretch of the north side of the street has been redeveloped.

I was still curious to find out more, so I went to look at more photographs, and street directories.

This part of the High Street was much photographed in the late 19th and early 20th centuries. Look at this post. (And its companions) But there are  more images in which to look for Slaters.

It’s actually in this picture, in the distance.  The railings are by the entrance to Kensington Gardens. The gateway has a heraldic lion holding a coat of arms. (Which survives to this day, like one other feature in the picture. Can you see it?)

Behind that, The King’s Arms public house. This picture is probably from 1887. the year of the Queen’s Golden Jubilee. The public house would soon be demolished. 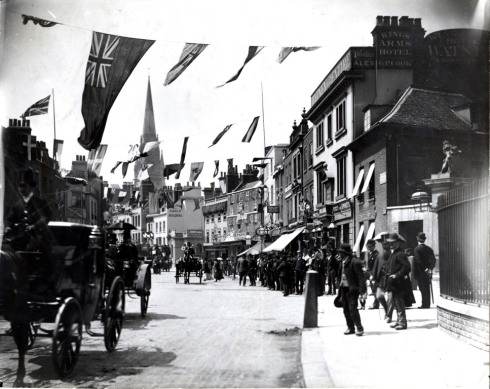 I used this picture in that previous post, but I enlarged a different section. The close up below shows Slaters, especially decorated as many shops were that year. 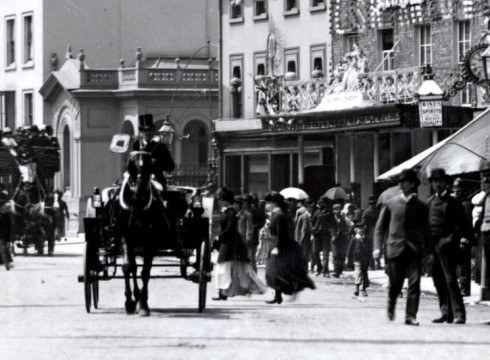 And a nice further detail of two young women hurrying across the street, rushing to get between the carriages. You can actually see that the one bringing up the rear has her right foot off the ground.

In this picture the street is plainer, but you can see just by the lamp of the Cumberland Arms the sign above the alley on the right of Slaters which says Hodgson.

We know from Kelly’s Street Directory of 1889 that this alley was called Cumberland Yard, and in it were the businesses of G T Patterson, Veterinary Surgeon and William Hodgson, coach builder. This picture might show Cumberland Yard.

(Look closely and find two men on the roofs of two of the buildings crammed together behind shops and inns.)

On the other side of Slaters, heading west was a wine merchants..

Three smart dudes in top hats, obviously all wine merchants thinking seriously about getting someone to load or unload those crates and barrels. The horse is thinking he’ll just wait till they decide what to do. No point in rushing things.

Those gates and railings? Still there today, I think, at the bottom of Kensington Palace Gardens. Even then, not just anybody could enter. 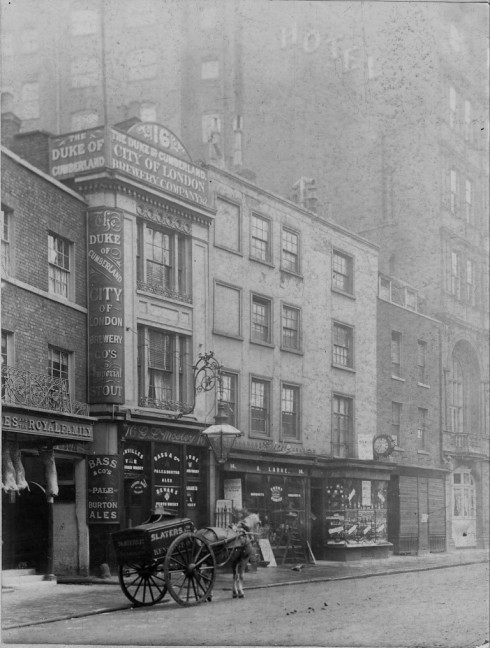 Slaters is stiil there on the far left. You can see part of a sign reminding clients of its services to the royal family. Outside, are another horse and cart are ready to go. You can even see the alley leading to Hodgson’s.  Next door is the Duke of Cumberland public house and a few other businesses. Above them all towers the side of the newly built  Royal Palace Hotel. Although the photo is faded you can just see the word Hotel in big letters.

The map also marks the Bank I referred to in this post, named after a favourite phrase from the Survey of London.

You’ve probably noticed that the Slaters in the first picture is not the same building as in the earlier pictures. This section of the High Street was subject to a London County Council road-widening scheme in 1902-1905. The management of Slaters took this opportunity to  build a much more prestigious and striking  structure.

Higher, and definitely more Burgundian. In 1902 it was celebrated in The Architect magazine. This image is what is called an ink photo, which I take to be an actual photograph gone over in ink to make it more suitable for publication in an illustrated periodical like the Illustrated London News. (You can see more examples of these in this post). It’s a nice clear image, which even offers a tantalising view up the alley. Is that a ladder in the distance? Unfortunately you can’t zoom in on these ink photos as easily as with a photographic print.

They also provided an interior view. 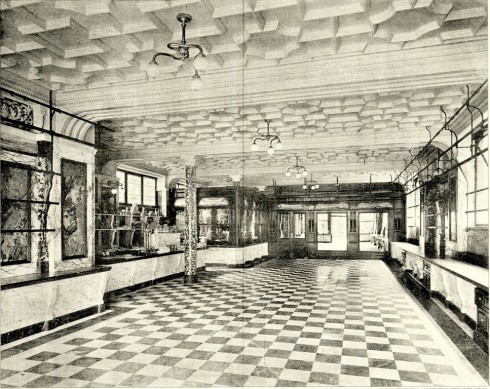 I love those light fittings.

I haven’t called Slaters a forgotten building as I sometimes do on the blog because it had a long history on the High Street and stayed in the lee of the Royal Palace Hotel until both of them were demolished at the end of the 1950s.  The early days of the hotel are another story of course, and one we will come back to soon. Kensington High Street always has more stories to tell.

Although my Kensington memory doesn’t go back to the 1950s I’m sure there are still plenty of people who saw Slaters in its heyday, or have family memories of it. If so, please leave a comment.