Walter Burgess presents Homes of the rich and famous

It’s been some time since I last featured Walter W Burgess on the blog. I was recently searching for a picture of Madame Venturi’s house and found one of Burgess’s liveliest street scenes, full of characteristic detail, showing the King’s Road as a quiet suburban road.

The delivery man with his baskets, the ladies walking a dog straining against the leash, the eccentric tricycle, pursued by another dog (Burgess included many animals in his pictures and often had this little dog somewhere, in this case almost in duplicate.) Madame Venturi’s neat villa with a smoking chimney is right in the middle. (For more on Madame Venturi see last week’s post)

Burgess’s best work has precision (a key skill for an engraver) and a quirky character which saves it from the prettiness of which it might be otherwise be accused. Compare it with the water colourist (and engraver) W.Hosmer Shepherd who covered similar ground.

Burgess had  a bit of a penchant for the houses of local celebrities and featured many in his book of etchings Bits of Old Chelsea (1894), so we can have a Hollywood style tour of Chelsea picking them out. No film stars, but famous names nonetheless.

This house, number 4 Cheyne Walk was the home of the novelist George Eliot. She moved in there with her husband John Walter Cross. You might argue that Burgess was pushing his luck in this case. George Eliot (alias Marian Evans and Mary Ann Cross) only lived there for three weeks in December 1880. Her husband, who suffered from depression had thrown himself into a Venetian canal on their honeymoon but survived. Although both of them loved the house with its views of the river, Eliot became ill with a recurrence of a kidney condition she had suffered from for years and died before the year was out. I don’t think that Burgess is suggesting that the woman following another dog in the picture is the author herself.

Cheyne Walk provided many subjects for Burgess. At number 59 was the house of W Holman Hunt. 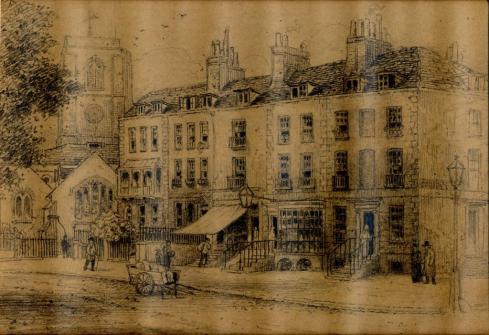 This was a slightly more modest residence further down Cheyne Walk, close to the Old Church. When Hunt became more famous he moved to Melbury Road in Kensington – from the early Chelsea haunts of the Pre-Raphaelite Brotherhood to the more affluent neighbourhood of Lord Leighton.

(Apologies for the wavy picture on the scan. The original is a pencil drawing in a thick mount)

By contrast that other famous member of the Brotherhood, Dante Gabriel Rossetti moved to a big house at the other end of Cheyne Walk. 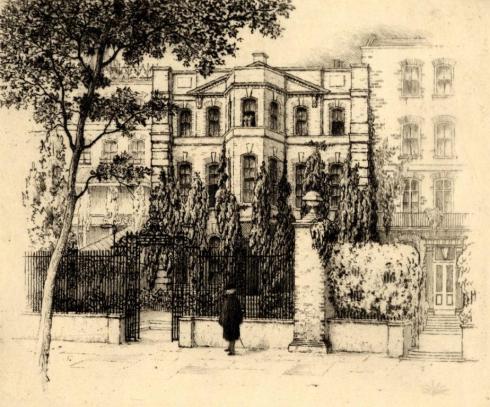 Number 16, also known as Queen House and Tudor House was the house Rossetti moved into in 1862 after the death of Elizabeth Siddall. Rossetti’s brother lived there for a while as did the poet Algernon Swinburne. I’ve mentioned Rossetti’s menagerie before, which included armadillos and wallabies but Burgess’s collaborator Richard Le Gallienne (who wrote the text of Bits of Old Chelsea) reports an incident I’d never heard before attributed to James McNeill Whistler. Apparently Rossetti acquired a zebu (an African species of cow) which had to be conveyed into the garden through the house tied up. It was tethered to a tree, a condition it disliked (or perhaps it never forgot its undignified entry into the property), and one day it managed to uproot the tree and charge at Rossetti who had to climb the garden wall to escape its vengeance. Rossetti never found a buyer and had to give it away although we don’t know to whom.

Once again I cannot say if Burgess intends the muffled up figure standing by the gate to be any of the residents. Intentionally or not Burgess has created a slightly disturbing character.

Whistler himself had several addresses in Chelsea. This is one of the Cheyne Walk ones: 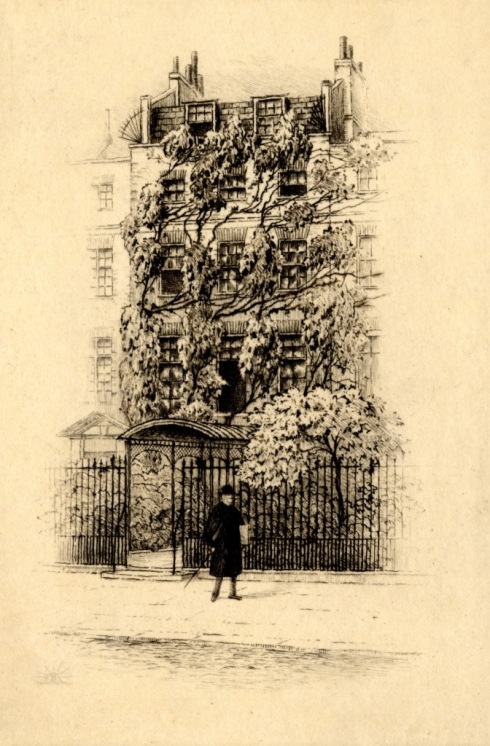 That could almost be the same figure outside, looking a little like some of the pictures of Whistler.

This is another pencil drawing of number 6 Cheyne Walk, the house of Dr Dominceti.

Bartholomew Dominceti bought the house in 1766 and provided therapy with medicated steam baths. There were 30 sweating chambers in the garden and four fumigating bedchambers. Although he attracted many famous names to the house, Dr Johnson decried his work. He left the house encumbered with debt but was remembered by many.

Mr Burgess’s tour takes us away from the river now to Upper Cheyne Row, at the end of which stood the house that Dr Phene built.  The the picture below, “the house where the coal man has just made his delivery” was the residence of the frequently impecunious journalist and poet Leigh Hunt.

Hunt was supposedly the model for Harold Skimpole in Dickens’s novel Bleak House. Although Hunt was recognisable to all his friends he seems to have remained on friendly terms with Dickens. He was also on good terms with a man who lived round the corner in Cheyne Row , someone who was definitely the greatest Chelsea celebrity of his day. 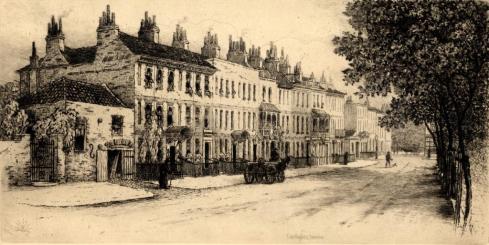 Thomas Carlyle,historian, critic and “The Sage of Chelsea” lived in the house which is now a museum dedicated to him from 1834 (Hunt was at the door to welcome him and his wife Jane as they arrived by hansom cab) In his old age he took frequent solitary walks and has been depicted by other Chelsea artists such as Walter Greaves. This might be him in the view below:

In deference to the great man, let’s have one more view of the house.

I think that plaque is a depiction of Carlyle so presumably this is a later view, after his death and the creation of the museum .

I’ve used this picture before but Belle Vue House, on the right was the home not only of the poet and painter William Scott Bell, an early member of the Pre-Raphaelite Brotherhood but also the birthplace of the novelist Elizabeth Gaskell.

Bell bought the house later in his life. Unlike the other members of the Brotherhood, Bell was not championed by John Ruskin but he retained the friendship of Rossetti.

Burgess also takes us to JMW Turner’s house with this small sketch. Turner lived there incognito with his housekeeper Mrs Booth and died there in 1851. Compare the picture with a similar view by W Hosmer Shepherd in this post.

The house of Thomas More was also long gone by the time Burgess was working but there may have been remants of it, such as this mulberry tree in the grounds of a Catholic seminary in Beaufort Street. A picturesque view in any case. 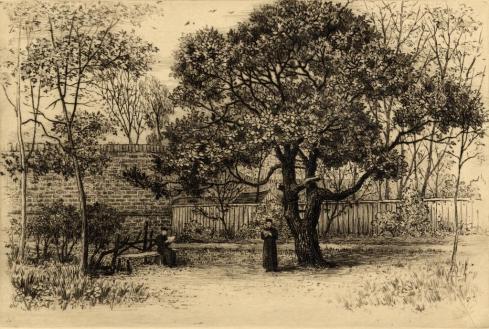 Heading west again the tour takes us out of Chelsea for a final celebrity resident.

Sandford Manor, in Fulham, is often said to have been the home of Nell Gwynne, the mistress of Charles II, and a key figure in Chelsea history and/or mythology, so I couldn’t leave her out. However very few of the many biographies of her mention this. One says that a great many houses have been associated with her, too many to be entirely credible.

But let’s think of “pretty witty Nell” as she was sometimes known walking in her garden. One of these days she can have a post all to herself.