It might be 10 years or more ago, when I was asked by a local resident to go to the former Kingsley school in Glebe Place to see a curiosity. The school was built in the 1890s as a county school and closed in the1970s. The building was acquired by the government of Libya and used as a school for the education of a relatively small number of Libyan children, most of them from the Embassy. At some point this too closed and the building entered the planning phase of existence, when redevelopment plans were made and submitted to the planning process and sometimes rejected wholly or partially. Buildings like this often change ownership too, until an acceptable version of the development plan is found. From what I can see on Google Street View, work is currently going on

My concern was a room on the ground floor where there was apparently a painting of local interest. There was, a view of the Old Church and Lombard Terrace. The picture was framed after a fashion. A wooden frame, attached directly to the wall, kept a glass panel a couple of inches from its surface. What I hadn’t been told was that the picture was actually painted on the wall. My informant had initially suggested that the picture could be remover and claimed by the Library on behalf of the Council. But i soon realized that this could not happen without a chunk of possibly load bearing wall being removed, at considerable expense. (And where we would put a large piece of masonry was another matter.)

So all I could reasonably do was send in a photographer, and the task fell to John Rogers, who was now working on a freelance basis.

The picture was in a difficult position fairly close to the opposite wall, hemmed in by glass and subject to reflection. John did his best and here are the results:

This one suffered from reflections.

Here, John found an angle which reduced some of the glare.

Here he tried a close-up of the Church. 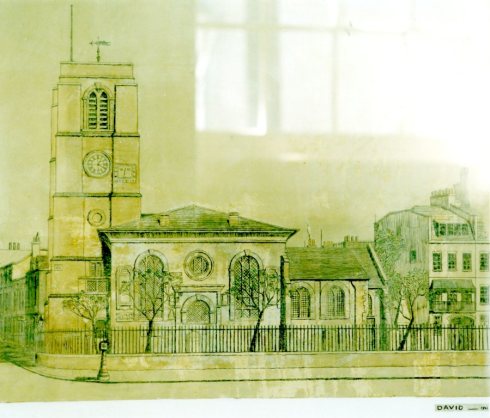 And here’s the story. During the Blitz, the school was used by ARP wardens as a vantage point for fire watching. There may have been a flat area on the roof where volunteers could safely stand. Several local artists did this kind of work, and one of them, known only to us as David ____ spent his down time by painting a picture on the wall of the ground floor room. Perhaps it was used as a break room or canteen. Afterwards, the school authorities decided to keep it, and preserved it as best they could. Remember, on 16th April 1941 Chelsea Old Church was bombed.

This was all that remained. A painting by another local artist, Francis Griffen. 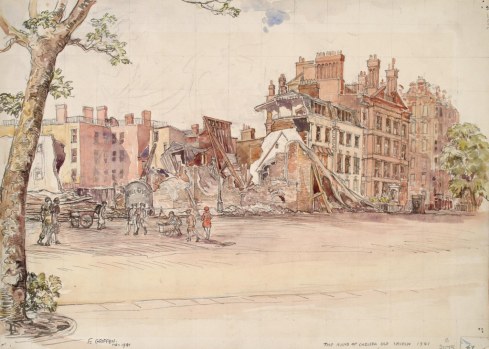 After the war it was decided to rebuild the church and the new building was made as much like its predecessor as possible.

So this picture is possibly the last ever painting of the original Old Church. As I said, this all happened years ago, and I don’t know what happened to the picture.

I can’t tell you if it still exists.

This is brought to you by Montague Rhodes Monkey aka The Provost, who keeps an eye on supernatural matters for the soft toy community.

The Met’s magic cops are closing in  on the Faceless Man. Peter and his master Nightingale now have more support from the regular police than they used to have but they still don’t know where their enemy will strike next. Anyone who’s followed the series, and I suggest you start now if you haven’t will be pleased to see Lesley makes a few appearances and seems to show she’s not completely under the control of the Faceless Man, but it’s still not enough. Is it, Mr Aaronovitch?

This entry was posted on Thursday, December 20th, 2018 at 1:27 am and tagged with Chelsea Old Church and posted in 20th Century, Chelsea. You can follow any responses to this entry through the RSS 2.0 feed.
« Christmas Days – up on the roof
Christmas Days: pungently Burgundian »

2 responses to “Christmas Days: an episode of archive history”