Short posts – the back of the card

The first time I wrote about the May Queens of Whitelands College was in 2011 in a jokey post called “Games for May” (a reference to the Pink Floyd song See Emily Play). I didn’t know that the Local Studies collection had a lot more material both on the May Queen Festival and the Chelsea Pageant, and that I would eventually find even more pictures and ephemera. In that post I just said I had found pictures in a dusty old box in a basement room. This was actually true. The old Print Room at Chelsea had a great deal of abandoned stuff which hadn’t made it into scrapbooks or filing cabinets. This particular selection of pictures were pasted to some loose sheets of scrapbook paper. On both sides of the paper, which is always irritating. (We have rescued many items which have been stuck to unsuitable backings and are now preserved in polyester sheets in picture/document chests). I expressed irritation about the both side of the paper thing and a friend gave me the solution. Take them home, put some cold water in the bath, put the pages in and float the photos and postcards off. You can dry them with tissue paper and flatten them again. It’s a recognised technique for separating photos which have stuck together. (Don’t try it on water colours though.).

This technique, as well as giving you a nice new set of photos and postcards also reveals what’s on the back. 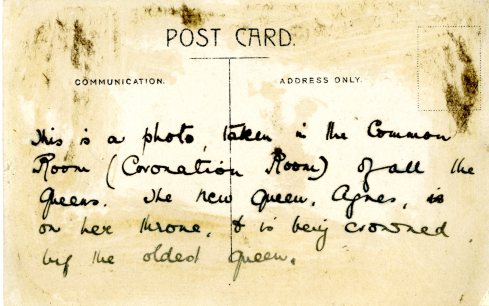 [This is a photo taken in the Common Room (Coronation Room) of all the Queens. The new Queen, Agnes, is on her throne, & is being crowned by the oldest Queen.]

This is the reverse of a picture we’ve seen before from the 1909 May Queen Festival.

Below, Agnes is enthroned in front of a painting of the 1903 ceremonies.

On the back is this caption. 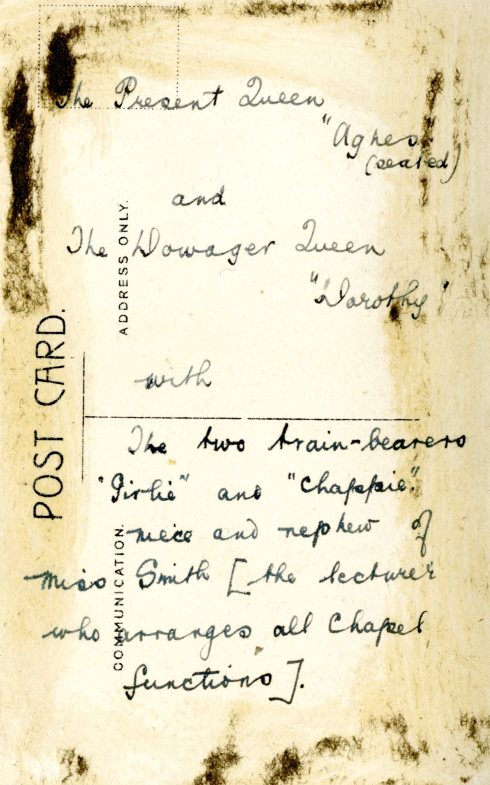 [The Present Queen “Agnes” (seated) and the Dowager Queen “Dorothy” with the two train bearers “Girlie” and “Chappie” niece and nephew of Miss Smith ( the lecturer who arranges all Chapel functions.) ]

I don’t know why Girlie and Chappie have chosen to conceal their actual identities behind a couple of bland nicknames. Girlie’s in the next picture too , actually bearing the train.

As the caption says. 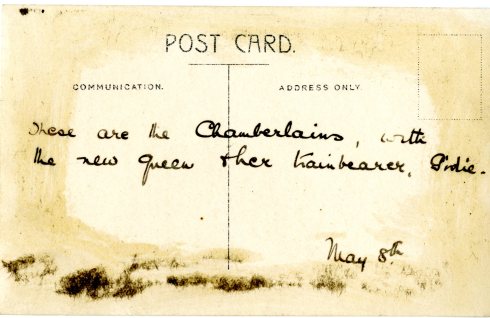 All the hand writing on the postcards is the same person. The last picture has some crosses inked onto it.

[May Travers is the middle maiden of the three with pitchers. Immediately below her is Millie Ford, “Persephone” and the second one from the right on the back row is “the daughter of King Kateos” alias, Yours v.sincerely E. Imogen Rust] 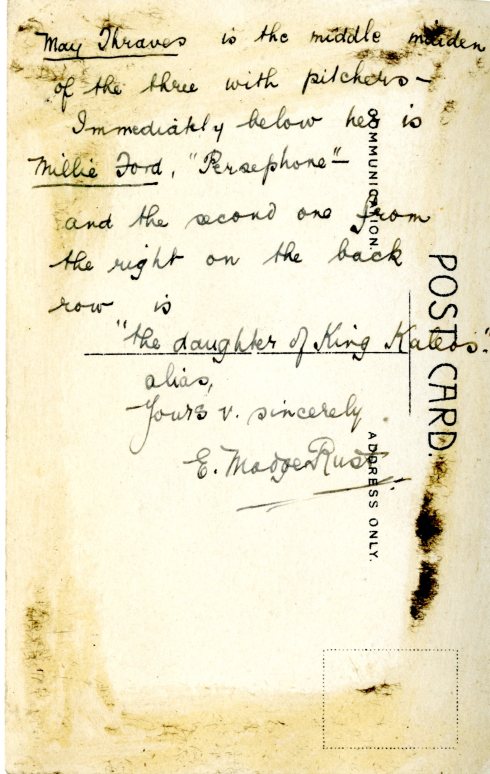 And here she is, the writer of the postcards, standing on a box. Nice shoes, my wife said. And they are. 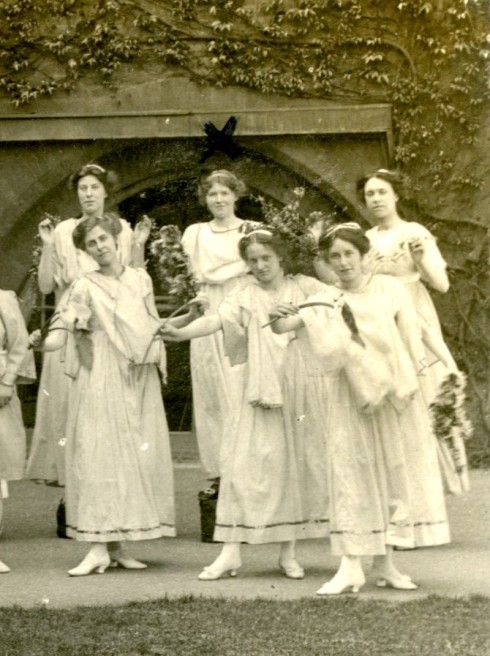 It’s not often you can get to zero in on a name and a face from one hundred and ten years ago.

I know I’ve done a May Queen post this year but this post has actually been sitting around for some time in a half-written state so I thought it was worth finishing off. If you’ve never read about this subject before try this one or this one.

This entry was posted on Wednesday, August 28th, 2019 at 9:51 am and tagged with Whitelands College and posted in 20th Century, Chelsea. You can follow any responses to this entry through the RSS 2.0 feed.
« Short posts: a plan for the High Street
Short posts: looking back at the Commonwealth Institute part one »

One response to “Short posts – the back of the card”