Holland Park 1987: after the storm

This set of photographs is kept in our main picture collection with the prints, paintings and other picture,s filed under the relevant class number, so the large envelope they’re kept in isn’t something I come across often. In fact I’d been in one of our archive rooms checking on the floor – there’s a water pipe underneath the concrete which sometimes gets hot, something you try to avoid in archive rooms and I was looking in cabinet drawers checking on the temperature in the room. I recognized the set of images and as I often do thought is there a blog post here? Obviously there was.

I showed these picture to one of my younger colleagues, who wasn’t even born at the time of the storm and found she had never even heard of it. So it goes. But the great storm of 15-16 October 1987 was a huge event across south west and south east England involving loss of power, damages to buildings, vehicles and trees. In addition 22 people died as a result of the storm. It deserves its popular title, the Great Storm.

I have vivid memories of the lights going out in our old flat that night. Our son was only two weeks old and we were going out the next day to register the birth at Chelsea Old Town Hall. On our way there the next morning we saw masses of leaves and small branches in the street and even a few fallen trees in the back streets of Chelsea. Later it became clear that there was masses of destruction across the London area. In the communal garden of the flats where we live now one massive tree had fallen, though not into the buildings, and the replacement trees that you see today are small compared to the others nearby.

I think these pictures are the work of the library photographer John Rogers, who must have gone to Holland Park in the days following the storm to make a record of the damage. Many parks, gardens and open spaces in London and elsewhere suffered damage similar to what you see here and I’m sure many people remember seeing similar scenes in the days and weeks that followed.

In many cases trees were knocked down completely and lie with their roots exposed, large pieces of soil still attached.

Paths were scattered with fallen branches. 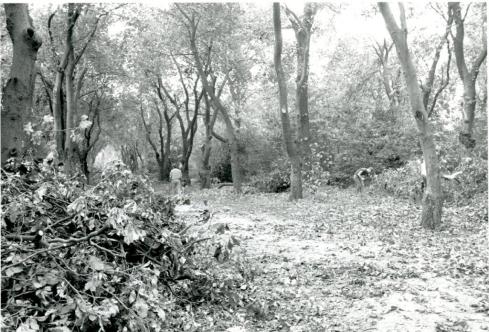 Some of them blocked. 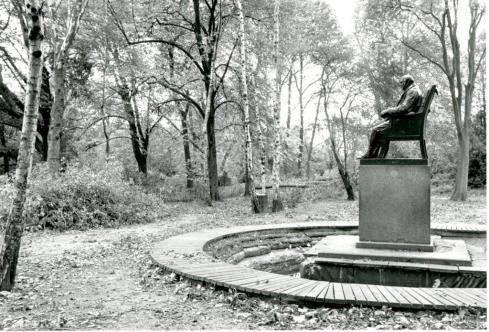 Some of the paths were open.

Parts of the park were reduced to a tangle of undergrowth.

But the structures in the park remained intact.

And life went on

But some inhabitants look pretty shocked. 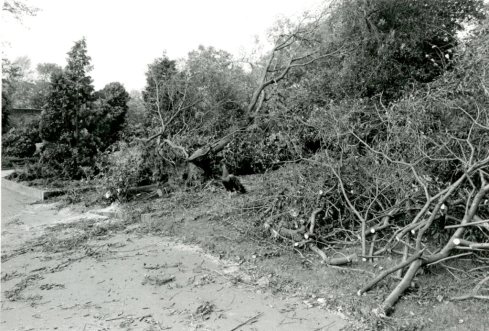 You can almost hear the bird thinking what on earth happened here? 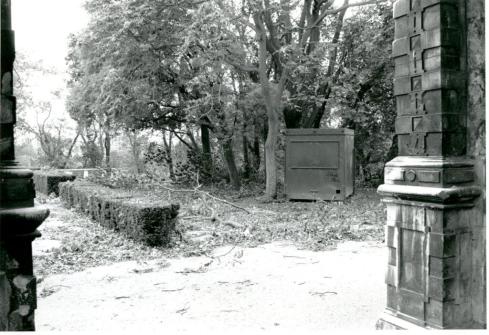 In a flurry of scanning I digitised 70 pictures, thinking that if I did them all it would never need to be done again. But It did make it harder to select the final set to use here.  Of course the damage was repaired over a number of years and the park now looks  like a sylvan paradise again. In the wider picture you might say we got off lightly. But you can mourn trees as well as animals and people.

In terms of  a word count this has been quite a slight post. But sometimes the pictures tell the story without the need for too much commentary. Even talking about what was coming this week on the blog induced some reminiscing among colleagues who were in London at the time. If you have any stories to tell about your experiences during or after the storm please leave a comment.

As I said last week I have noted a number of deaths in the last year. I was saddened to hear of the recent death of David Le Lay. David was a local architect and a leading figure in the Chelsea Society. I worked with him on several exhibitions and helped him with some of his research. He was an expert on Chelsea, much more of an expert than me. He was good-humoured and courteous with an eye for life’s absurdities. He once did me the favour of coming to the library to appear in a Dutch TV show to explore the recollections of a woman who believed she lived in Chelsea as a servant in a former life. He kept a straight face throughout and even thanked me for arranging the experience. Chelsea will miss him. My sympathies to his partner and friends.

Here he is working on one of his projects – the landscaping of Dovehouse Green.

This entry was posted on Thursday, February 2nd, 2017 at 8:50 am and tagged with Great Storm 1987, Holland Park and posted in 20th Century, Kensington. You can follow any responses to this entry through the RSS 2.0 feed.
« Lancaster Circus: a vanished crossroad
Bignell in Wimbledon: sunny days »