The taxman’s taken all my dough / and left me in my stately home /Lazing on a sunny afternoon.

After last week’s look at a couple of the lost houses of Campden Hill I was reminded that I’d hardly referred in this blog to the most famous house with extensive grounds in that area, not completely lost today as it is one of the best public parks in London and is home to Opera Holland Park. However, looking at the picturesque grounds today the casual visitor might not realise that Holland House and the surrounding estate were once  an important feature of social, cultural and political life in London. The house was damaged by bombing during the war and the whole estate was sold and passed into public hands  afterwards but until then the park was a private estate.

Most of the images this week come from a set of postcards produced by the Friends of Holland Park which show the murals by the artist Mao Wenbiao for the Orangerie Arcade in Holland Park. At the start of December it’s good to go back to the summer.

The murals depict an afternoon in the 1870s when a garden party is in progress. The social elite sit around as casually as they can in formal wear and make the most of a pleasant day. Some of them look like they’re enjoying it more than others. 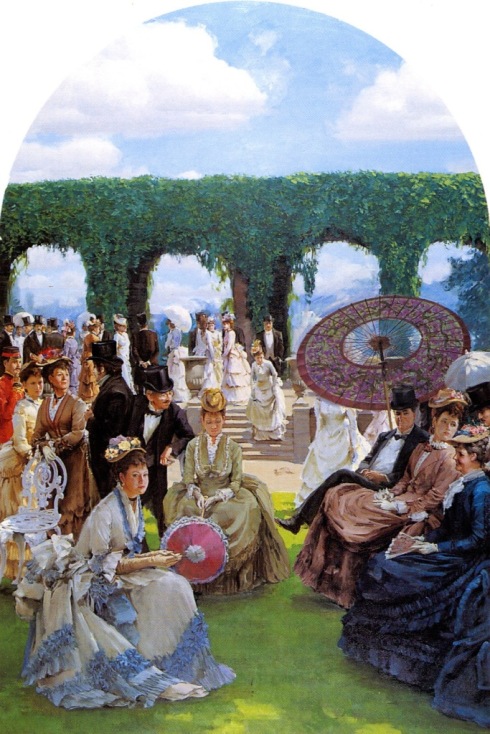 They’re not far away from the Kensington High Street we looked at a few weeks ago, in terms of physical distance. But just like with last week’s country houses they’re a world away from the daily life of the High Street.

There are photographs which show the gardens. 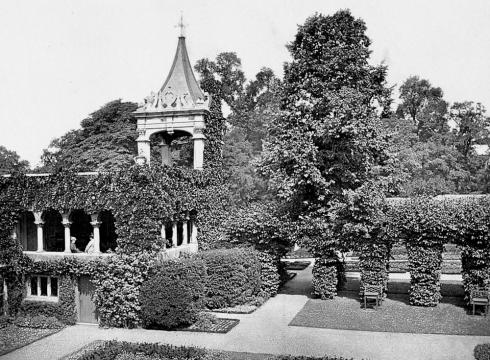 This is a particularly good example, with the foliage-covered  arches, and the couple having a quiet talk in a secluded spot. But the murals catch the colour of a Victorian summer’s day.

You can see the same kind of crowds in contemporary images:

But an engraving like this one seems a little distant compared to the immediacy of the mural paintings. 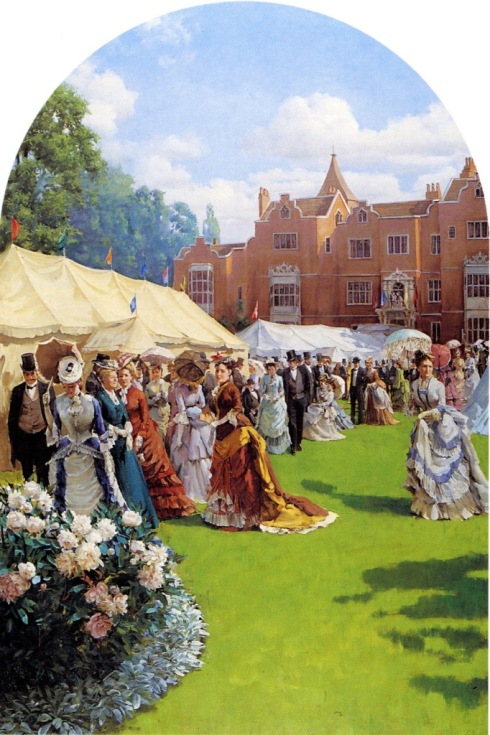 Is someone going to use the phrase chocolate box? I think that would be unfair. Sometimes an artist’s impression tells the story more effectively than a more authentic image.

A photograph of the Dutch Garden shows the intricate design of the formal garden and by necessity accentuates the stillness and tranquility of the scene.

But it’s also good to see such a garden inhabited by a throng of guests. 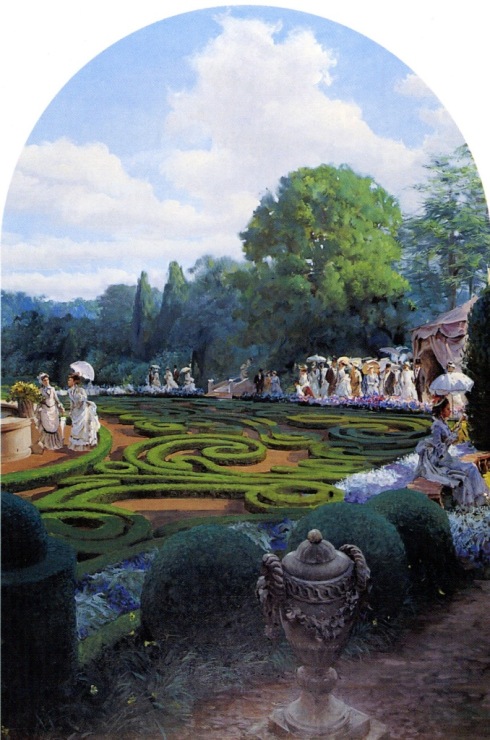 The intricate design of the garden is echoed by the equally intricate costumes of the ladies parading around it. The post-crinoline fashions of the 1870s reached a kind of zenith of the elegant and the impractical which fits very well with a formal garden on a sunny day.

Hang on, I hear you say. Is that the same garden? Well, I admit to some doubt. The fountain looks the same but I can’t say how much artistic licence is being used here. There are many experts on Holland Park who know very much more than me and there was more than one formal garden near the big house. 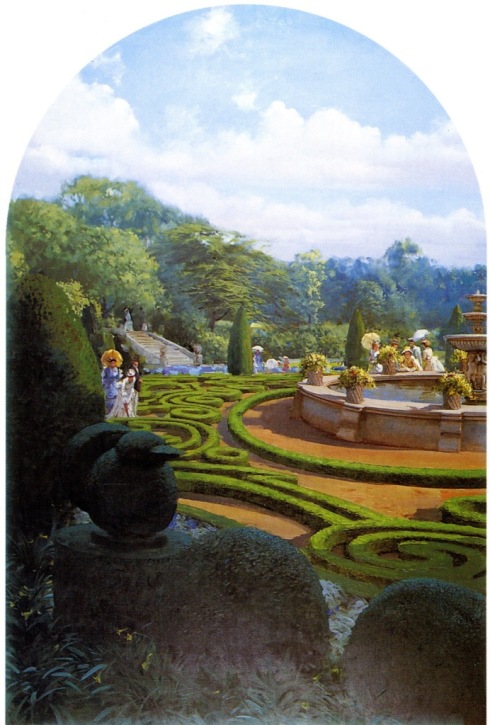 All I can say is the question of design doesn’t detract from my enjoyment of the pictures.

Here, a few of the guests take a break from the crowd. Their gentleman companion  looks a little uncomfortable or bored. It occurs to me that another of the reasons why I like these pictures is the faint air of English psychedelia about them which makes me think just as much of Pink Floyd or Traffic albums as the actual 1870s.

Another icon which echoes the same notion is the glass house below – a feature of the Victorian garden which has entered literary / musical consciousness.

The last two pictures show a maid helping a child with dirty hands and finally a view from the point of view of people outside the gilded enclosure.

An “ordinary” woman looks on as the affluent guests enjoy themselves. The two girls with her though don’t look very interested in the activities beyond the shady spot where they are sitting, near the Armillary Sphere. These three can also enjoy for a moment or two the pleasure of being in the Park on that same  summer’s day of the mind.

I went down to Holland Park today and had a look at the formal gardens and the murals for myself.

I was told that the artist included the faces of members of Park staff among the figures in the murals.

So who knows who this pensive lady is, caught in an involuntary act of time travel?

The dark figure below on the other hand is definititely contemporary.

This entry was posted on Thursday, December 4th, 2014 at 12:06 am and tagged with Holland Park, kensington, Mao Wenbiao and posted in 19th Century, 20th Century, Kensington, Painting. You can follow any responses to this entry through the RSS 2.0 feed.
« A little bit of faded grandeur – country life in Kensington
Dreams of the Westway 2: Desolation Row »

One response to “Sunny afternoon: a garden party in Holland Park”