Dreams of the Westway 2: Desolation Row

Here is one view of a street called Maxilla Gardens and how it might have looked after the completion of the Westway. 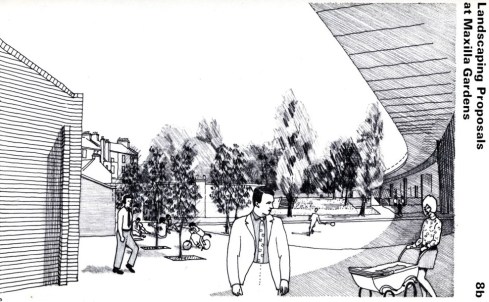 You could derive any number of ideas about the assumptions in this idealised view of happy shiny people. But this week we’re going back to the reality of that location before any building began.

Maxilla Gardens was a small street which curved between Cambridge Gardens and St Mark’s Road under the shadow of the Metropolitan Line railway to Hammersmith.

Here is a view from 1908 showing one arm of the curve looking from St Mark’s Road: 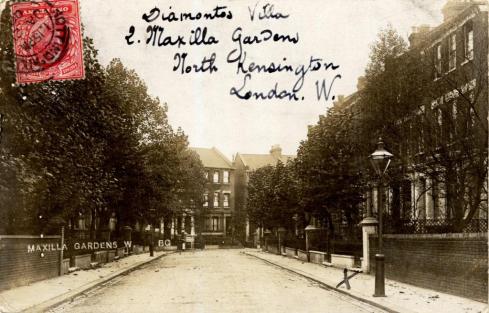 It looks as though there’s some kind of debris on the pavements, perhaps an omen of the destruction to come. The writer of the card says, in French, that he or she is living in a quiet area. 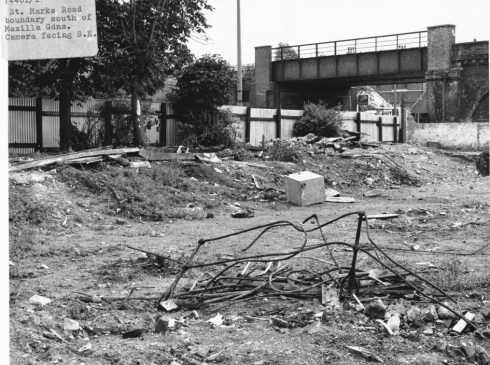 I can’t quite explain its relationship to the postcard image. St Mark’s Road  ran more or less across the foreground of 1908 image. The garden walls visible in the front belong to housse in St Mark’s Road. In the 1966 view St Mark’s Road is behind the fence running under the railway bridge 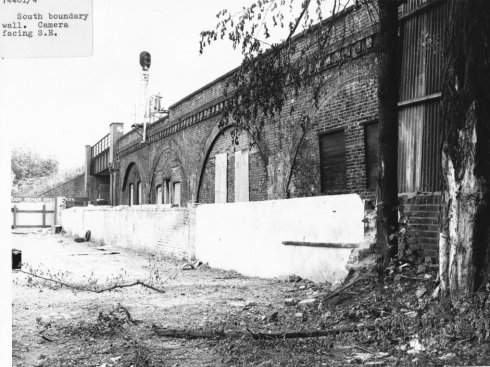 The cleared site was full of interesting debris like this wooden spindle which once held cable or wire. 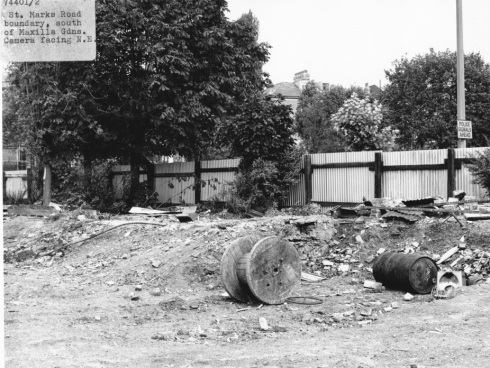 Or these inexplicable objects which looked like the bisected hulls of small boats, or the discarded carapaces of a giant urban insect unknown to biology. 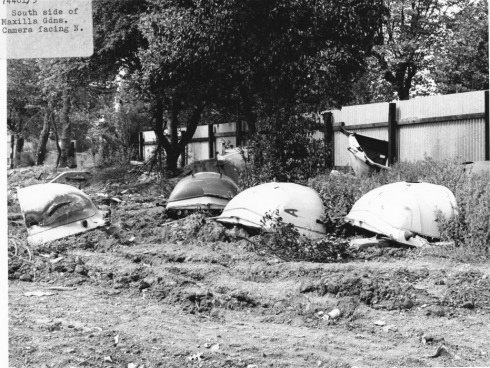 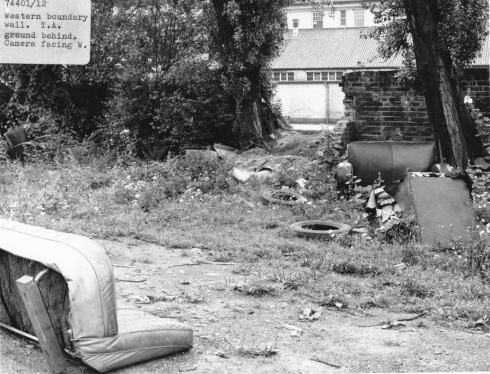 And the usual ocean of tires. 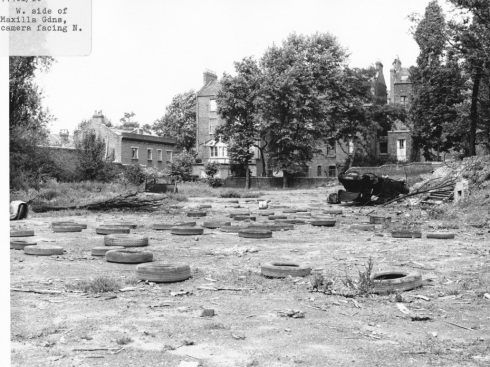 Behind the trees I think, you can see the rear view of the houses in Cambridge Gardens. 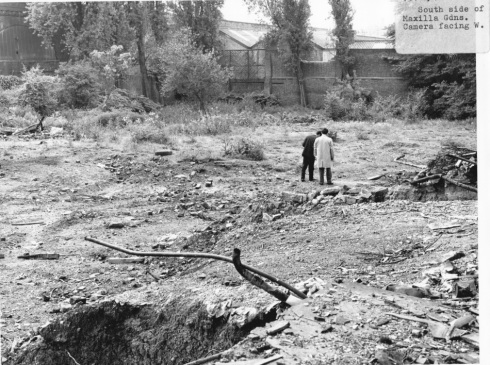 In close up these walls could be somewhere else entirely and behind the wall there could be an isolated garden and a  ruined house. 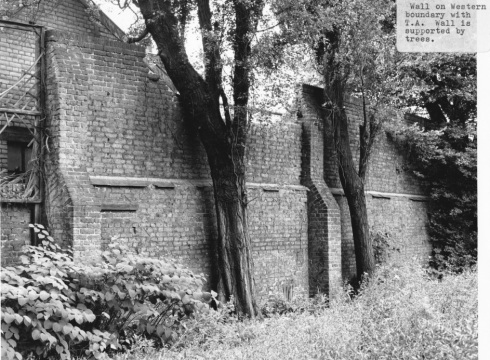 Although this clearer view indicates that the wall may be part of the railway viaduct – you can see part of an arch. 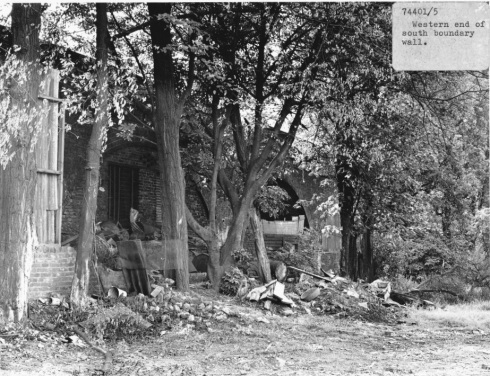 The picture below though shows the other end of the site. Beyond the undergrowth is a well kept lawn with a wooden bench. Again the impression is of pastoral (bucolic/rural/arcadian- other ntonyms of the word urban) decay and seclusion rather than urban destruction. 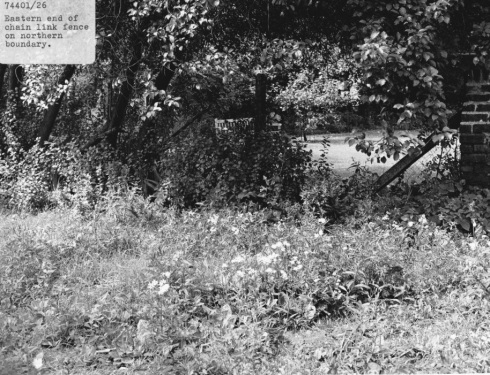 There’s room for a bit of garden archaeology. What purpose did this set of steps formerly serve? 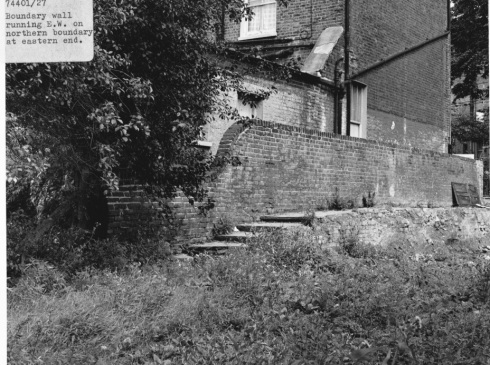 Here is the archaeologist himself at work, contemplating the last days of the sylvan scene. 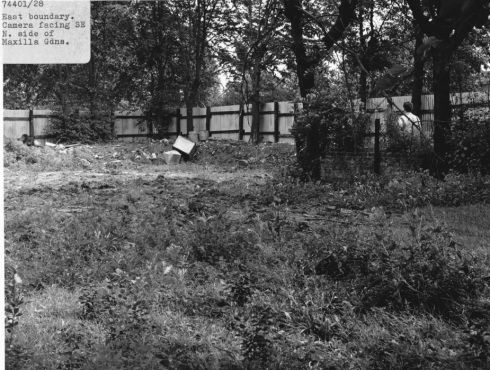 Somewhere in his vicinity a random pile of rubbish threatening to spill over into somebody’s garden. 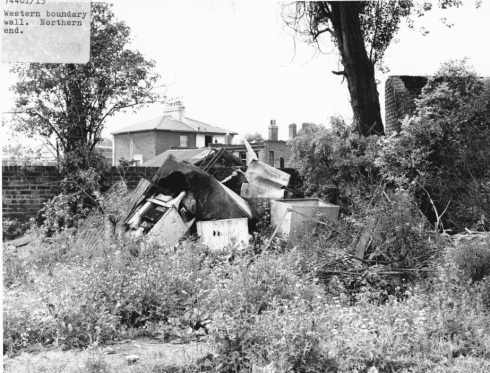 I actually had the idea for this post while watching the Imagine documentary on Anselm Kiefer (8 more days on the BBC iPlayer – highly recommended by me at least) which featured piles of industrial debris turned into art, installations of concrete piles covering acres of land and derelict buildings turned into exhibits. Would it be going too far to see the whole Westway project as a giant art installation in concrete and steel rising from urban demolition?

I was going past the new development at the Commonwealth Institute on a bus this morning. The old central building has been stripped of its glass cladding (temporarily I assume) and surrounded by three new residential blocks. I thought back to the images of the Institute before the development and proposed an alternative museum dedicated to the imaginative world of J G Ballard (him again) which would have left the dilapidated interior as it was, just adding some crashed cars, an empty swimming pool, and sections from some concrete road supports. Which gets us back to the Westway again.

And just for art’s sake: 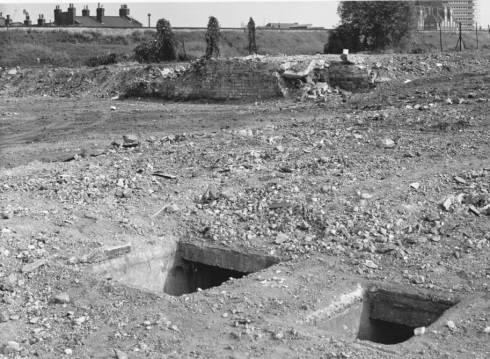 Another pair of holes.

Sharp-eyed readers will have spotted that there is now a Search box on the blog, which will enable you to find things more easily. It was slightly easier to install than I thought.

No more Westway for a while. Your Christmas treat is nearly ready, but I haven’t worked out what I’m writing next week.

This entry was posted on Thursday, December 11th, 2014 at 12:45 am and tagged with Maxilla Gardens, North Kensington, Photographs, Westway and posted in 20th Century, Kensington, London, North Kensington, Transport. You can follow any responses to this entry through the RSS 2.0 feed.
« Sunny afternoon: a garden party in Holland Park
Faeries in Kensington Gardens »

3 responses to “Dreams of the Westway 2: Desolation Row”