Just before Christmas I did a post which largely arose out of the large number of people you could see in some Survey photos taken around South Kensington Station. I  thought I might do something similar based around the Gloucester Road / Cromwell Road area, another busy area where pedestrians get into the pictures.

We’ve previously examined Gloucester Road Station and the area around it, including one back street which no longer exists (Lenthall Place, pleasingly called a “pokey cul-de-sac” by the Survey of London, another one for my list of excellent phrases from that great work) and the view from above. (How many links can I get into a couple of opening sentences?)

As it turned out I became more interested in a comparatively short stretch of road from the corner of Gloucester Road to Ashburn Gardens, on the south side of Cromwell Road. This section has been entirely redeveloped since John Rogers took these picture in December 1969. The pedestrians for the most part were squeezed out as I realised I had another Forgotten Buildings post on my hands.

There are a couple of interesting women crossing the road here, though heading southwards. 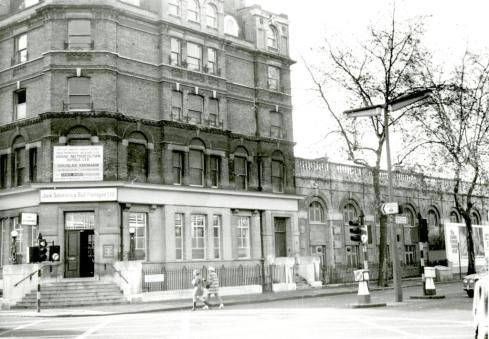 The building on the left, at one time a bank, was by 1969 the home of Jack Solomons and Bud Flanagan (“Turf Accountants”, an elegant phrase from the past), but as the large sign above their names indicates had been acquired by Grand Metropolitan Hotels Ltd for the construction of “London’s largest hotel”.  This acquisition included a large section of the south side of Cromwell Road.  The plan might not have been carried off quite as intended, but there has been some substantial development on this stretch of road including a pretty large hotel (the Penta/Forum/Holiday Inn) and a shopping arcade behind the corner, where Lenthall Place  used to run which  also covers the tube station platforms. (If you look at the post called “From the Penta Hotel” you can see a view from the 1980s when there was little left behind the wall.)

This view looks west from the middle of the road (I hope John was standing in a safe spot). On the left, you can see the wall with a balustrade which enclosed the area including the station and its platforms (and Lenthall Place) I think the arches may be purely decorative, although a couple of them contained actual doorways as you can see below, along with another copy of the same announcement from the ambitious hoteliers. 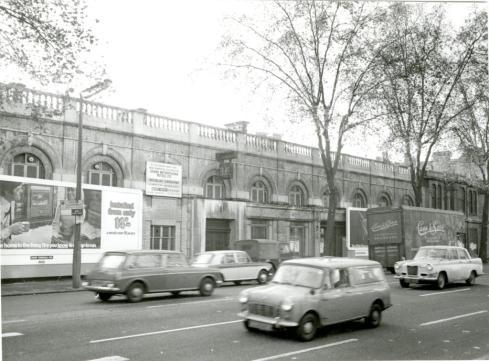 Albert Rawlings was a motor company. You can see the doorway in the picture below.

The wall went as far as a short section of three storey houses which filled the space up to Ashburn Place.

Here’s a close up of the entrance to Albert Rawlings.

And, in one of the houses an Estate Office.

We might as well let those three women and the cable reels have their own close up.

The rest of the block consisted of a set of houses built about 1877-78 which were shorter than most of the surrounding buildings. To make up for a lack a height the row ends with a tower.

A nicely gothic touch. The corner of Ashburn Place. 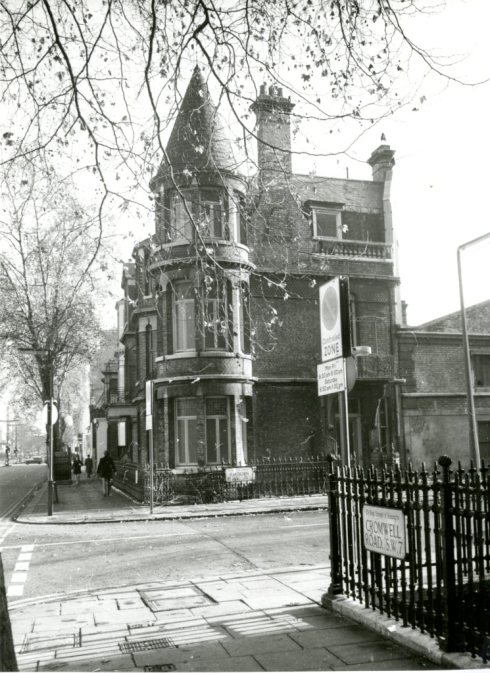 Perhaps because they had already been bought for demolition, these buildings have an air of grubby neglect, and a certain dark atmosphere in there old monochrome pictures. They would not survive to be improved with interior refurbishment and double glazing.

This is the next block, between Ashburn Place and Ashburn Gardens, with yet another notice.

This is where the Penta Hotel was built, not an especially attractive building, and not popular with architectural writers or local residents, but functional.

Many of these buildings were already hotels, like the Courtland or the Eversleigh House Hotels.

Some of the detail of the frontage is quite pleasant, as below. 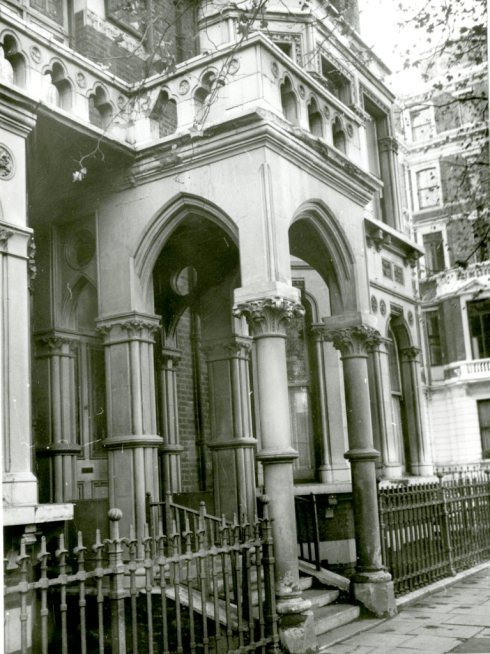 Behind the block, there was a garden square, now also gone.

Below, John turns and looks back again, eastwards.

On the left is the wall which conceals the railway line. Next to it, just out of picture was the road out of the West London Air Terminal. (The post I wrote about that has become one of the most popular posts on the blog , so it’s hardly a forgotten building although I still sometimes have to explain what the Terminal was and how it worked. )

Finally a map showing the area we’ve been looking at.

This is about 1950. We don’t have many of this series so we’re lucky to get a good view of what used to be in this tiny part of London.

This post changed as I wrote it. I might use some of the pictures I discarded another time. But it’s quite timely, as there are plans to rebuild the Holiday Inn. I’ll probably continue it soon with a look at those side streets, Ashburn Place and Ashburn Mews.

Thanks to all those who wrote comments last week and offered corrections and solutions.

This week it was the turn of a great author to die, Ursula K LeGuin. Her key works, the Dispossessed and the Left Hand of Darkness were two of the most influential science fiction books ever written. The latter, with its theme of gender fluidity, is still relevant today. Her Earthsea books remain one of the best fantasy series. That K stands for Kroeber, her father’s surname. He was an anthropologist. This background may be one of the reasons why her created worlds are so well realised. (I also have a soft spot for her Philip K Dick influenced novel The Lathe of Heaven. Apparently she and Dick went to the same high school at roughly the same time but never met. When they were adults they also never met although they spoke on the phone.)

Thanks to Ursula K Le Guin, one of the greats of science fiction.

Oh no. Another obituary. My wife once described Mark E  Smith as “that drunk who shouts over music”. Which is unkind, but there is a grsin of truth there. It’s also true that he was acerbic, imaginative and capable of astonishing flights  of lyrical fancy. He also had the ability to assemble talented musicians time and again from the first notes of Bingo Master’s Break Out up till the end.  Fall fans will have dozens of highlights to savour in the years to come. Frightened, Fiery Jack, Prole Art Threat, Victoria, Theme from Sparta FC. Start your own list. Smith’s death can hardly be described as a surprise, but it’s a shame.

This entry was posted on Thursday, January 25th, 2018 at 7:53 am and tagged with Cromwell Road and posted in 20th Century, Forgotten buildings, Kensington, South Kensington. You can follow any responses to this entry through the RSS 2.0 feed.
« Figg’s World’s End
A walk down Ashburn Mews »

6 responses to “Forgotten buildings: a few numbers in Cromwell Road”