Searching for the Ford Capri

We’re going on another tour through the photo survey this week but not down a single street. The photo survey pictures were taken by John Rogers between 1969 and 1975, mostly in 1970 and 1971. That’s a few years before my brief time working in the motor trade. I worked cleaning new cars for a garage that had a British Leyland franchise. Some of you who remember the 1970s may remember how awful British Leyland cars were then – the Allegro, the Marina and above all the Princess a car so awful it has been almost obliterated by history. Occasionally my sales manager Bob would acquire a Ford for one of his special customers and we would both welcome these examples of decent automotive technology with some relief. There were Escorts and the new mark 4 Cortina but our favourites were the Granada and the Capri, both genuine classics hallowed by their appearances on TV in the Sweeney and the Professionals. I stand very little chance of finding a Granada in the photo survey pictures (they first came out in 1972) but I might just find a Capri.

So where do you look for a car? 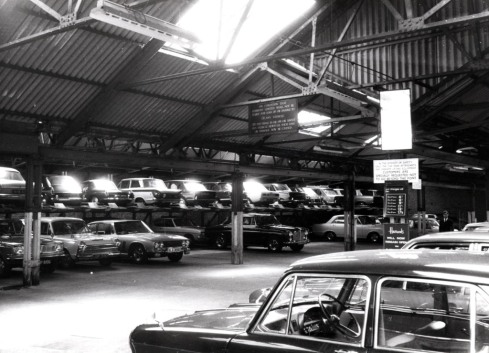 A garage is one place to start. This is one of those garages a few of you may remember where they stack the cars neatly but you don’t have instant access. Most of these cars looked pretty old even in 1970. In terms of design it was a transitional period (but aren’t they all?) between the staid fifties cars like that Rover you can see, the watered down versions of American designs and the hatched-backed days to come.

That’s a Ford Corsair on the left, with its odd pointed nose. Before we leave can I just invite any car enthusiasts to identify any of the cars in these pictures? There was a time when I could have done that but it was thirty odd years ago. I’m not really a car person. I don’t even drive. I just found myself around car people and got interested. Let’s get outside. See where we were?

But it’s only a lowly Anglia already fairly low on the meter of desirability even by 1970. What’s the one behind it? Addison Avenue must have been a quiet street. Just off it was Addison Place, a strange little converted mews kind of a street overlooked by Campden Hill Towers.

And that car in the foreground would I think be a Ford Consul, the fifties styled precursor of the Granada.

Not all of the British Leyland marques were hideous. That’s a Triumph Spitfire , a traditional British sports car. Other mews streets were full of cars. 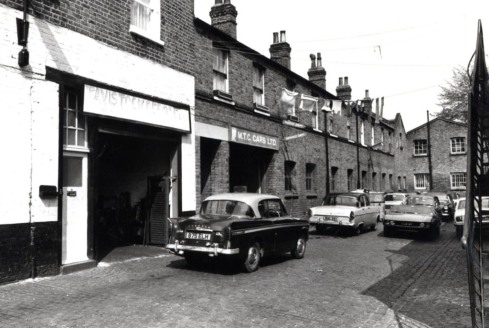 Amid the old style cars in this back street of garages an expensive looking sports car, probably Italian. The odd thing I sometimes think is that expensive sports cars still look like that decades later as if that low wide look is the optimum shape.

The mews streets used to be filled with small garages servicing cars. Note the sign: Barclaycard Welcome – something of a novelty then.

A 60s novelty the Mini Moke parked in Linden Gardens. In the same street the opposite of a Mini Moke:

It’s also a Ford, a 60s American model, but I can’t make out the word on the side. I’m sure someone can help me out with that. Below a home grown model: 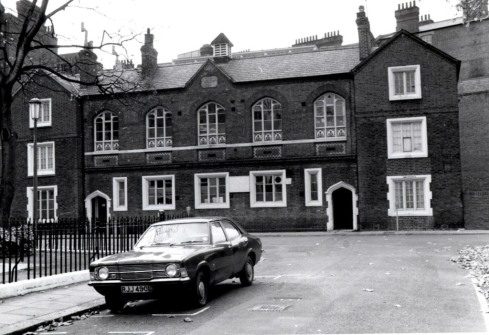 The Mark 3 Cortina parked in Christchurch Street. A bit of a classic itself. Nearby another puzzle for you: 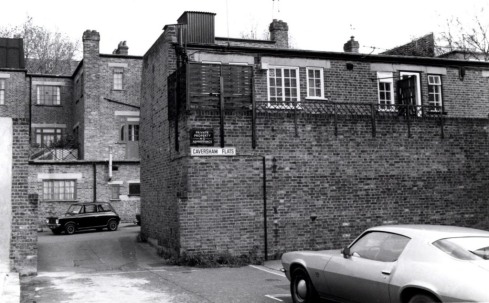 I should know what this is, it looks so familiar. Someone tell me (No, not the mini.)

The first sighting of our quarry is back at the other end of the Borough in Clarendon Road.

The slightly cluttered styling of the Mark 1 Capri. And having found that one I came across another down in Earls Court.

Is that guy in the window coming back to close the boot?

In the very same street a Mark 2, at last an example of the car that sat in my cleaning bay in Poland Street.

There it is by the fence. For me the Mark 2 Capri represents the mid seventies like no other car, better than the high performance cars of the era. Seeing it in this picture reminds me of a time when the traffic was lighter, the cars were serviced in back streets and the Ford Capri was exciting and glamorous, if you can imagine such a time.

As I said above if you can identify any of the other vehicles in these pictures or you have to correct any inadvertent errors of mine, please leave a comment.

19 responses to “Searching for the Ford Capri”