It was about this time last year that I had to visit Accident and Emergency at the Chelsea Westminster Hospital in Fulham Road which resulted in a blog post about the history of the site. By coincidence, on World Cancer Day (February 4th), I was at the Royal Marsden Hospital, also in Fulham Road. There was no long waiting period for me to speculate about history but nevertheless when I got back to Local Studies I had a look to see if we had any interesting pictures.

The Royal Marsden has only been named after its founder since 1954. It was originally known as the Cancer Hospital and had several homes inclusing a building on the north of the Fulham Road called Hollywood Lodge before the current site was acquired. 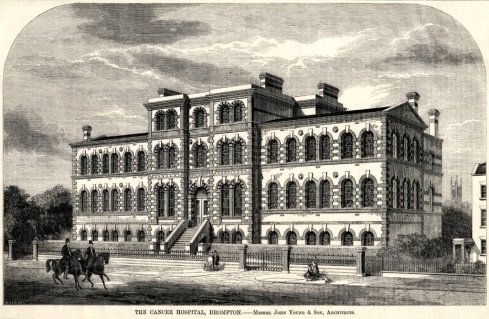 This is the design by David Mocatta of Young and Sons.

As you can see from this map of 1862 only the front part of the building was built orginally and the hospital with its garden only occupied part of the block. 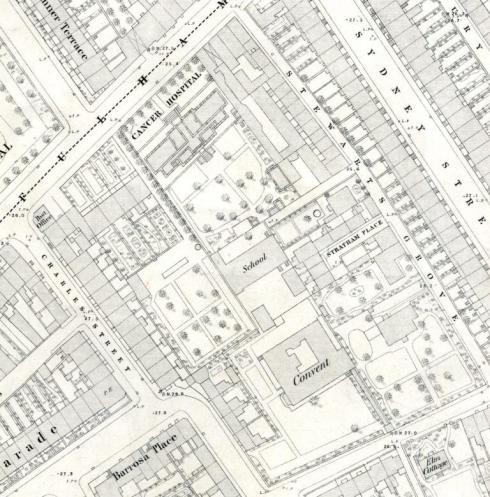 This picture shows the extensive redesign of 1885 by Alexander Graham which adopted the familiar red brick facade.

The hospital was the brainchild of Thomas Marsden, already an eminent surgeon and founder of hospitals. This picture illustrates the incident which brought about the creation of the Royal Free Hospital.

Marsden found a young woman dying on the steps of St Andrew’s Church in Holborn. No less than three hospitals turned him away when he tried to get her admitted because he lacked a letter of introduction from a governor of the hospital. As a result he started a committe to found a free hospital with no such requirements, the first in London.

We sometimes imagine the Victorians as hypocritical, ignoring social and health issues but they were surprisngly direct in such matters as the namimg of institutions. The Free Hospital was just that (as later “free” libraries did not charge subscriptions).  On the north side of the Fulham Road the hospital subsequently called Brompton Hospital had a different name originally.

The largely untreatable condition Consumption (Tubercolosis) needed its own hospital as many of the existing insitutions would not take those who suffered from it. Marsden’s next venture which stemmed from his dissatisfaction with the current treatments for cancers was naturally called the Cancer Hospital. Marsden believed, contrary to many doctors of the time that cancers could only be treated successfully with a combination of surgery and medicine. This sounds obvious now but at a time when caustic substance were applied to patients to treat cancers it was a great step forward.

He had considerable help and finance from one of the great philanthropists of the day, Angela Burdett-Coutts:

She loaned money, paid a  yearly subscription, donated to the building fund and took a great interest in the progress of the hosiptal. She laid the foundation stone in 1859.

Extensions to the building were added, though the gardens remained for  many years. This is a rear view from 1893:

In close-up you can see this group of women sitting together on a bench. The picture as a whole is obviously posed but the three of them look quite natural, especially the one at the end, her face turmned towards, but not quite looking at the camera.

The middle one seems to be wearing a veil, and the other has a dressing over part of her face.

The picture below shows the hospital in in the 1930s, just before the “Royal” was added to the name during the brief reign of Edward VIII.

The 1935 map below shows how the building had expanded. The girls’ school behind it remained, and the convent. Both those buildings have been absorbed since into medical buildings of one kind or another. Note the Chelsea Hospital for Women at the bottom of the image, which existed as a seperate institution until the 1980s.

The garden was smaller by 1958 but had survived.

The picture below is un-dated. It seems to have come from the cover of one of the nursing magazines (the Nursing Times or the Nursing Mirror) and must date from the 1960s or 70s.

Some professionals may recognize the “new micro-pump” being demonstrated

Also in the 1960s the Hospital celebrated 100 years of its existence. On these occasions hospitals always seem to ask a couple of nurses to dress up in 19th century uniforms. 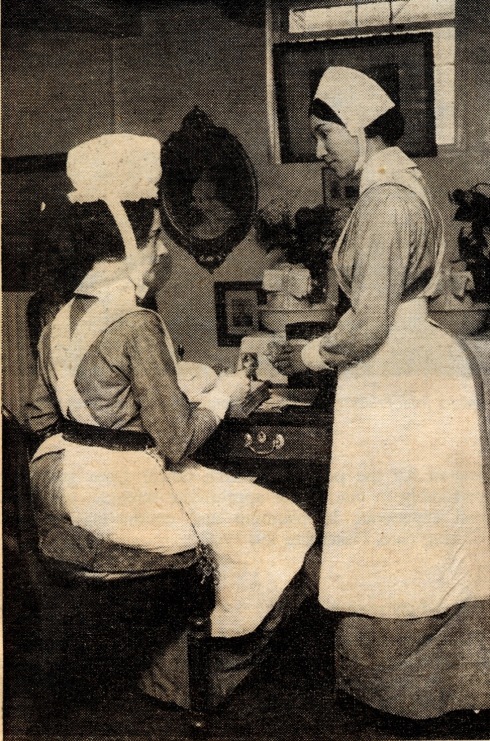 No matter how funny they look. We have in the collection a picture of a group of nurses in old-fashioned (but slightly more flattering) uniforms at the Chelsea Westminster Hospital, so this sort of thing still goes on. It’s a pleasing note to end on. The Royal Marsden, although devoted to conditions which can end in death,  has always aimed to be as pleasant for staff and patients as possible. The gothic architecture of the surving 19th century hopsitals now often looks dark and gloomy and by contrast I think this view from 1885 exemplifies the slightly fanciful, optimistic look of the Royal Marsden.

If anyone is interested I have no big health concerns following my visit to the Marsden. In fact I should say here that I was very impressed with the way I was registered, scanned and saw the consultant all in one morning. The staff were unfailingly polite and helpful. But inevitably my mind went back to one of my heroes, the late John Diamond who was treated at the Marsden and who wrote a light-hearted lifestyle column for the Times magazine which turned into a chronicle of his life with cancer. He was one of the first of the group of people who have written first person accounts of cancer and his story, told in his book “C: because cowards get cancer too” and in the archives of his Times column (if you can find them) should not be forgotten.

If you’ve gone so far as to read this post twice today you may have noticed that I’ve changed one of the pictures to make the history of the building a bit clearer. My thanks to the authors of the Victoria County History volume on Chelsea (Middlesex XII) and to David Brady (the Antiprofessor) for some eagle-eyed fact checking,

This entry was posted on Thursday, February 12th, 2015 at 12:23 am and tagged with Fulham Road, Royal Marsden Hospital, Willaim Marsden and posted in 19th Century, 20th Century, 21st Century, Brompton, Chelsea. You can follow any responses to this entry through the RSS 2.0 feed.
« Street life: Kensington close ups – part one
Manufactured in Chelsea »

3 responses to “The Cancer Hospital”