Sombre and majestic, four monstrous towers rise through a blue haze. The lights of the loading yard and the ancillary buildings shine through the evening gloom. Those who had feared the forbidding structure later came to see it as a huge gothic folly looming over the dark waters. And the giant was beneficent, giving power to that network of tunnels and tracks which carried the people of the city from home to work and back again.

Or that’s how it was seen by Londoners in the years before the Second World War. London Transport was proud of the great beast crouched by the river and the task it performed.

Inside, operators attended to the creature’s need like priests attending to a captive deity in a temple. Lots Road Power Station or Power House as it was often called was one of those big engineering feats which belong to the early years of the 20th century such as the Titanic. Unlike the Titanic, the Power House never failed its people.

This view from the river shows its cathedral-like windows. In daytime this was no dark tower. Light streamed in on the boilers and generators.

Before the Power Station came the skyline of Chelsea Reach looked quite different. 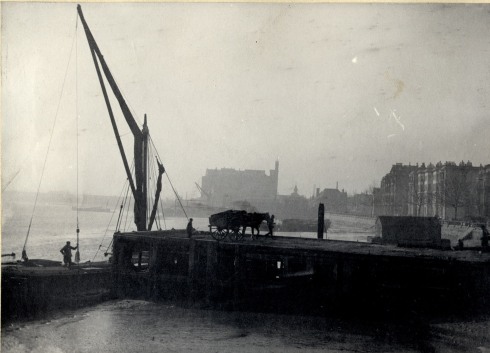 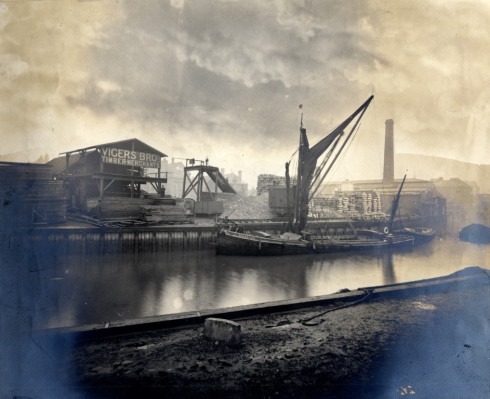 Salopian Wharf, the home of Vigers Brothers, timber merchants. There were also docks for coal, stone, slate, lime and cement. There were Pipe Benders and Sanitary Lead Liners. The General Omnibus Company had a granary and forage depot in Lots Road.

J R Watkins and Co, colour manufacturers. Both the Colour Works and Salopian Wharf were crushed under the Power House.

An article in the Graphic for 1925 says “from this uncouth dragon on the Middlesex shore flows the power to move a city and light it. The gaiety and life of London are stored in its coils; for out of the strong comes forth sweetness, which radiates invisibly from west to east.” The uncouth dragon inspired artists.

Nocturne by Luther Hooper (a detail of a wider view of the river). 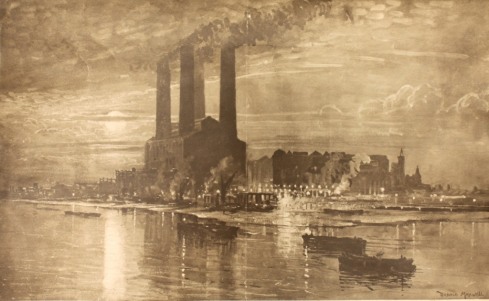 An atmospheric piece by Donald Maxwell.

A 1941 watercolour by Francis Griffen. (We’ll have more of him another day) The bomb damage in the vicinity of the power station justifies pre-war fears that the power station would be a target for air raids in time of war. This picture from the late 1930s is captioned Bomb Magnets. Lots Road is in the background with Fulham Power Station in the foreground. 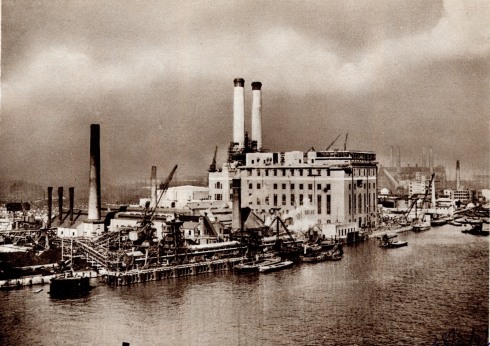 Lots Road of course survived the war intact and remained part of the riverside scene.

But let’s not go any further than 1951. I’ve told you all about the later years already (See The case of the missing chimneys in the list of posts on the right) Let’s leave the sleeping giant alone and remember the days when it was a triumph of engineering inspiring poster artists and bloggers alike.

This entry was posted on Thursday, September 20th, 2012 at 12:51 am and tagged with Chelsea, chelsea creek, Lots Road Power Station and posted in 20th Century, Chelsea. You can follow any responses to this entry through the RSS 2.0 feed.
« Forgotten Chelsea: scenes you’ll never see
Wild, wild west: Buffalo Bill in Earls Court »